Top 100 Famous Quotes of all time 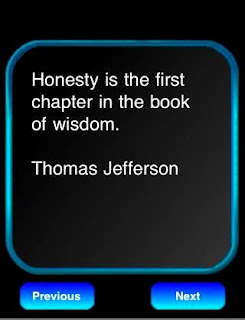 "A little learning is a dangerous thing."
Alexander Pope

"A picture is worth a thousand words."
Fred R. Barnard

"A thing of beauty is a joy forever."
John Keats


"Advice is what we ask for when we already know the answer but wish we didn't."
Erica Jong

"Always bear in mind that your own resolution to succeed is more important than any other thing."
Abraham Lincoln

"An appeaser is one who feeds a crocodile, hoping it will eat him last."
Winston Churchill

"An eye for eye only ends up making the whole world blind."
M.K. Gandhi

"An inventor is simply a fellow who doesn’t take his education too seriously."
Charles F. Kettering

"Believe that you are defeated, believe it long enough, and it is likely to become a fact."
Norman Vincent Peale

"Believe those who are seeking the truth. Doubt those who find it."
André Gide

"Children are the world's most valuable resource and its best hope for the future."
John F. Kennedy

"Don't hate, it's too big a burden to bear."
Martin Luther King, Jr.

"Early to bed and early to rise, makes a man healthy, wealthy, and wise."
Benjamin Franklin

"Example is not the main thing in influencing others. It is the only thing."
Albert Schweitzer

"For fools rush in where angels fear to tread."
Alexander Pope

"God helps them that help themselves."
Benjamin Franklin

"He has all the virtues I dislike and none of the vices I admire."
Winston Churchill

"He that goes a borrowing goes a sorrowing."
Benjamin Franklin

"He who permits himself to tell a lie once, finds it easier to do it a second time."
Thomas Jefferson

"Hitch your wagon to a star."
Ralph Waldo Emerson

"Home is the place, when you have to go there; they have to take you in."
Robert Frost

"I am patient with stupidity but not with those who are proud of it."
Edith Sitwell

"I can't believe that God plays dice with the universe."
Albert Einstein

"I have made this letter longer than usual because I lack the time to make it shorter."
Blaise Pascal

"I think and think for months, for years. Ninety-nine times the conclusion is false. The hundredth time I am right."
Albert Einstein

"I want to know God’s thoughts… the rest are details."
Albert Einstein

"I’d rather live with a good question than a bad answer."
Aryeh Frimer

"If I have seen a little further it is by standing on the shoulders of Giants."
Isaac Newton

"If we have no peace, it is because we have forgotten that we belong to each other."
Mother Teresa

"If you can't stand the heat, get out of the kitchen."
Harry S. Truman

"If you have to ask how much something costs, you can't afford it."
J. P. Morgan

"If you would be loved, love and be lovable."
Benjamin Franklin

"If you're ridin' ahead of the herd, take a look back every now and then to make sure it's still there."
Will Rogers

"In Heaven, all the interesting people are missing."
Friedrich Nietzsche

"It has been said that democracy is the worst form of government, except all the others that have been tried."
Winston Churchill

"It is the mark of an educated mind to be able to entertain a thought without accepting it."
Aristotle

"It wasn't raining when Noah built the ark."
Howard Ruff

"Keep away from people who try to belittle your ambitions. Small people always do that, but the really great make you feel that you, too, can become great."
Mark Twain

"Keep your friends close and your enemies closer."
Sun-Tzu

"Lettin' the cat outta the bag is a whole lot easier'n puttin' it back in."
Will Rogers

"Logic will get you from A to B. Imagination will take you everywhere."
Albert Einstein

"Love your neighbor - but don't pull down your hedge."
Benjamin Franklin

"My words fly up, my thoughts remain below; Words without thoughts never to heaven go."
William Shakespeare

"Neither a lofty degree of intelligence nor imagination nor both together go to the making of genius. Love, love, love, that is the soul of genius."
Wolfgang Amadeus Mozart

"Never ascribe to malice, that which can be explained by incompetence."
Napoleon Bonaparte

"Never leave that till to-morrow which you can do to-day."
Thomas Jefferson

"No man is justified in doing evil on the grounds of expediency."
Theodore Roosevelt

"Oh, East is East and West is West, and never the twain shall meet, Till Earth and Sky stand presently at God's great Judgment Seat."
Rudyard Kipling

"Once you say you're going to settle for second, that's what happens to you in life, I find."
John F. Kennedy

"One man who has a mind and knows it can always beat ten men who haven't and don't."
George Bernard Shaw

"Politics is more dangerous than war, for in war you are only killed once."
Winston Churchill

"Religion is the opiate of the people."
Karl Marx

"Science is a wonderful thing if one does not have to earn one's living at it."
Albert Einstein

"Some are born great, some achieve greatness, and some have greatness thrust upon 'em."
William Shakespeare

"Some books are to be tasted, others to be swallowed, and some few to be chewed and digested."
Francis Bacon

"Speak softly and carry a big stick; you will go far."
Theodore Roosevelt

"Success is never found. Failure is never fatal. Courage is the only thing."
Winston Churchill

"That which doesn't kill us makes us stronger."
Friedrich Nietzsche

"The Almighty has his own purposes."
Abraham Lincoln

"The best executive is the one who has sense enough to pick good men to do what he wants done, and self-restraint enough to keep from meddling with them while they do it."
Theodore Roosevelt

"The best way to see Faith is to shut the eye of Reason."
Benjamin Franklin

"The child is father of the man."
William Wordsworth

"The difference between a successful person and others is not a lack of strength, not a lack of knowledge, but rather in a lack of will."
Vince Lombardi

"The difference between stupidity and genius is that genius has its limits."
Albert Einstein

"The hardest thing in the world to understand is the income tax."
Albert Einstein

"The greatest lesson in life is to know that even fools are right sometimes."
Winston Churchill

"The language of friendship is not words, but meanings."
David Henry Thoreau

"The magic of first love is our ignorance that it can ever end."
Benjamin Disraeli

"The pen is mightier than the sword."
Edward Bulwer-Lytton

"The person who reads too much and uses his brain too little will fall into lazy habits of thinking."
Albert Einstein

"The quality of a person's life is in direct proportion to their commitment to excellence, regardless of their chosen field of endeavor."
Vince Lombardi

"The quickest way to double your money is to fold it over and put it back in your pocket."
Will Rogers

"The time to repair a roof is when the sun is shining."
John F. Kennedy

"There are no gains without pains."
Benjamin Franklin

"There never was a good war or a bad peace."
Benjamin Franklin

"To be prepared for war is one of the most effective means of preserving peace."
George Washington

"To err is human, to forgive divine."
Alexander Pope

"We are always paid for our suspicion by finding what we suspect."
David Henry Thoreau

"When you come to the end of your rope, tie a knot and hang on."
Franklin D. Roosevelt

"Whenever you do a thing, though it can never be known but to yourself, ask yourself how you would act were all the world looking at you, and act accordingly."
Thomas Jefferson

"Winning is a habit. Unfortunately, so is losing."
Vince Lombardi

"You can have everything in life that you want if you just give enough other people what they want."
Zig Ziglar

"You cannot help men permanently by doing for them what they could and should do for themselves."
Abraham Lincoln